After more than 20 years I still read Sports Illustrated every week. However if you were to watch me pick up a new SI you might be confused. The first thing that I do is flip the magazine over to the back cover -- open the page and read "The Life of Reilly" commentary.

The following "Life of Reilly" article is not about high school baseball, or even baseball for that matter. But it very easily could be. I found the article amusing yet too true and in some cases a sad commentary on how we as a society have trouble letting kids be kids.

Two fathers stand watching their kids. "Well, the wife and I have finally come to a decision," says the one with the Reebok headband.

"Yeah?" says the one in the Nike cap.

"Amber's gonna concentrate 100 percent on tennis from now on. Her coach says she's gotta pick one sport right now, or she'll get left behind the other girls."

"She looks like she's got good quickness," says the cap.

"Her kinesiologist says she's quicker than Venus at this age," says the headband, beaming.

"We've decided the same thing about Ike and golf," says the cap. "If he's going to stay ahead of the other kids, he's got to specialize now."

"His physiologist says his muscle fibers twitch faster than Tiger's!"

"Golf's fine, I guess," says the headband, "but our financial planner says for girls, tennis is it. With Venus and Serena pushing the global marketing envelope, our yearly income should be seven figures!"

"You mean her income."

"Ike's psychologist has told us he's gifted in lots of sports besides golf, but there's no time," says the cap. "You don't want to be spinning your wheels."

"Course not!" says the headband. "You don't want to be shut outta the best camps -- "

"And the national teams."

"I mean, yeah," says the cap, "it looks like my wife will have to quit her job just to drive Ike to all his golf tournaments. But there's no Tiger without Earl, right?"

"Tell me about it!" says the headband. "I'm working three jobs just to pay for all this stuff -- Amber's pilates are killin' me! -- but it's all about the kids, man."

"I hear that. Like, Ike's media tutor won't be cheap, but it'll free up his afternoons for his bunker workshops."

"Hey, you're gonna have expenses," says the headband. "We ripped out the bedrooms upstairs and put in an indoor tennis cage, but whaddya gonna do? The little girl across the street has a live-in hitting partner!"

"The wife and I feel that if we put in the hours and the money now, Ike will be good enough to go straight to the PGA Tour out of high school and not waste time going to college. Not that college is a bad thing."

"Nah, not really bad," says the headband. "But Amber's career strategist thinks she can do Wimbledon by 14. That's what's important. Did you see the MLS kid whose parents let him miss a game the other day because of his prom?"

"Sounds like somebody's got their priorities mixed up," says the cap. "I mean, I'm sure Ike will be a little disappointed he'll have to leave home and move in with the Leadbetters soon, but some decisions a father has to make for his son."

"I know, I know," says the headband. "I'm a little bummed that Amber won't get to play lacrosse or basketball or, even, I don't know, piano, but how can she do that and put in the 13 hours a day that will give us the level we need?"

"Hey, I only wish my dad had done this for me," says the cap.

"Hell, yeah!" says the headband. "I know this dad who's renting a house on a lake this summer. Says he and the family are just gonna fish and skip stones!"

"I mean, what are you gonna do with your kid for two weeks on a lake? I wouldn't know what to say to Amber for two weeks!"

"Most summers from now on, Ike will be playing the mini Asian tours, to build up his tolerance for travel and foreign foods. He'll need it when he gets his Gulfstream IV."

"Which one's yours, anyway?" says the cap.

"The little one in the pink diaper near the incubator," says the headband.

"Beautiful. Mine's in the blue. With the nurse and the bottle." 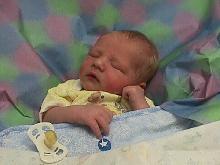 Don't miss The Life of Reilly (Total/SPORTS ILLUSTRATED, $22.95) -- a best-of compilation of Rick Reilly's columns and features, with a foreword written by Charles Barkley, available now at the CNN/Sports Illustrated Stuff Store