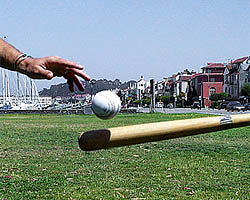 
Let me state that my ultimate goal and hope is to see a return to the use of wooden bats in high school baseball. My belief is that for that to ever happen the college game must change first.

There are few events as pure and special as the NCAA Division I College World Series. The city of Omaha, Nebraska has become a a single word name every bit as recognizable as when a person says "Thermos".

When asking a Division I coach what the goals are for his team in the upcoming season, the simple one word answer, "Omaha" says it all.

This year it has been announced that the outfield fences at Rosenblatt Stadium will be moved back thirty (30) feet. Why is this necessary? Omaha is home to a minor league baseball team. Does the minor league affiliate need the longer fences?

The answer is NO. The reason for the deeper fences is the College World Series.

The past few years have seen 175 pound second baseman hitting homeruns into the outfield bleachers, it has seen 200 pound, power hitting outfielders blast balls over the massive Rosenblatt light towers.

We all know what the real reason and answer is for the need to lengthen the fences in Omaha and probably in many of the college baseball stadiums around the country.

The answer is the metal bat. Each year the manufacturers improve their products. Yes, I know we now have "Bat Speed Exit Ratios" (BSER) that are meant to compensate and result in a ball leaving a metal bat at no greater a velocity than it would from a wooden bat. How is it that the "powers that be" in the NCAA are missing such an easy point, that most of us easily see?

Fewer players can hit a ball with a wood bat at the same velocity as those with a metal bat. We all know that it has to do with swing mechanics and bat speed, etc. This is proven each year by the number of great or very good college hitters than can not make the transition to hitting every at bat in professional baseball, with a wood bat.

A couple of more reasons for the disparity between the results of a batted ball off of a wood bat and those of a collegiate certified metal bat:

Rumors and comments abound that the college coaches will not approve any change to wood bats because many would lose lucrative endorsement deals for both themselves and their teams.

I would hope that is not the real reason. However I am not naive enough to believe it could not be a possibility.

One coach's comment was, "If everyone uses sawed-off broom sticks, so will we!"

With the top (most expensive) metal bats now priced at almost $300 dollars a college player could buy 7 or 8 wood bats a season for the same money. Then factor in that most of the top line metal bats will not make it through a complete spring season, (dent, crack or lose their "pop") the cost in metal bats may reach $600 - $800 per player buying bats. How many wood bats would that be? I think you get my point.

What about Major League Baseball? Would they be interested in helping defray the costs of changing to wood bats, at least for the first couple of years?

Imagine how much less of a gamble their scouting would become. How much easier it would be to project how a hitter will do at the professional level. How a pitcher will fare when facing wood bats versus today's "rocket launcher" metal bats. Seems like the money saved in player's drafted and never panning out, due to not being able to hit with wood could fund this program.

Baseball is a game of traditions. Loud cries erupt from people at the slightest proposed change to the time proven rules of the game. How did the college and high school games get to this point?

I have never met a baseball fan that does not love the sound of a ball being sharply hit with a wood bat. Why then are we willing to accept the "ping" of a metal bat at Rosenblatt Stadium each June?

It is time for the college coaches to look into their baseball hearts and make the change back to wooden bats. The high school game will follow that lead. Leave the metal bats to the game of softball, where they originated.


Footnote:
I was sent the following information by a source that I trust:

Total cost 26 million.
Of this group, a couple of them got a cup of coffee in the big leagues. I wonder how many of the players would have been high picks if the schools were using wood bats?