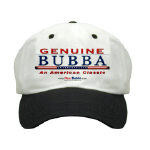 We'll hold ten (3-Day) events a year at a cost of $499.99 per event to the participants.
We will guarantee that you will be seen by a professional scout and a college recruiter;
Be listed on our website, which is fully accessible to every college coach in the nation that has the time to surf the internet for his players;
Get a Bubba's Best Bashers tee shirt;
Furnish you a place to stay (better bring your own sleeping bag and pillow); feed you once each day (hope you like pinto beans, cornbread, & onions - plenty of sweet ice-tea):
And a signed baseball from Bubba himself.

Attend all of our events will automatically place you in the top 100 and we will send your Player Profile to every major league club in the USA with a special letter from Bubba himself recommending you as a quality player.

Our events will be played on the best outdoor facilities (available) in the following places:

We accept cash, money orders or cashier's checks only made out to Bubba's Baseball Bashers Bonanza, LLC. Absolutely NO REFUNDS.

Hurry while we have spots available! Sign up for all ten events and become a Golden Bubba Basher. This exclusive honor will entitle you to extra beans and cornbread, extra straw in the barn loft, use of the outhouse (w/ moistened corncobs) instead of the designated tree and $1.95 off each event bringing the grand total to only $4,980.49 for the complete package - what the hey, just make the check out for $4,900.00 even. AND, you will be automatically added to the Bubba's Best Bashers List in the top 100 and receive a FREE copy of the list. WHAT A BARGAIN?! Better hurry and sign up, before the limited number of players is reached.

Addendum 1: There will be plenty of room in the adjoining pastures for vendor booths. Call me for prices at BR-549.

Addendum 2: We will not accept food stamps, "shine", eggs, chickens, hogs or possums as payment.

Bama Bomber,
I would consider sending my son, but I noticed there is no ravioli on the menu.
No deal.
LOL

Dear Bubba's Baseball Bashers Bonanza, LLC,
Are there any discounts for fathers who only have 6 teeth? Or a family rate for 10 kids?

Pinto beans, cornbread, & onions - plenty of sweet ice-tea, can we substituts a few more beans if we bring our own drink (a little "shine")? Now that's what I call a four course meal! WooHoo! Do you have financing available for the whole package, say 15 years?
Hey, u my cousin?

What scares me so much is that someone from Tennessee might send a check.

Gloveman,
According to Bubba no "shine" will be permitted at our showcases due to what we feel will be a heavy turnout among the three states of Tennessee (East Tennessee, Middle Tennessee & West Tennessee). It would be far too exciting for the outsiders and yanks. We also will require all guns to remain in their racks in the pickups.

Bubba said that only single branch cousins would count in any discounts to be given. If you are on a fork you'll have to pay full price. The single branch alone will probably cost him several thousand dollars in profits.

He also said he would accept gold teeth as partial payment IF they are proven to be genuine. There will be a ten kid discount. All after #9 will be free until you reach #16. Sorry, he said we cannot allow more than 15 from any one family.

Isinthegame,
Just your asking about ravioli would disqualify you for the southern showcases.

bbscout, You may get applications by calling BR-549 or emailing me and I'll get them to Bubba for you.

Bama,
Bighit is wrong! We ain't got no checks up here in Tennessee. Would you take that ole blue tick hound in trade. Full Cry magazine got ole blue ranked # 2 in the state. American Cooner got him at # 7 but there's a lot of politics with American Cooner. Probably cause we didn't show up at their trial hunt. Them trial hunts don't mean nothin anyway, it's how they do in the swamps that count. I'd put ole blue up against any of 'em! If you ain't got no problem with us setting up a booth and making a little minnow money, I'll bring some more of them sweetgum ball and sell 'em as porkeypine eggs to them fellers from Texas.

My youngest boy's been telling me about some new fangled bats made out of metal, reckon they'll be any show up with them out of town people?

Bama,
How about a compromise.
We'll bring our own ravioli, and when we get there - we'll stuff 'em with some of them pinto beans. Sounds like good eatin to me.