It seems like only last week that he was a nervous freshman just hoping to make the team. Now he has started his "Senior Year."

The evolution is almost complete. You have watched him grow from a skinny nervous kid 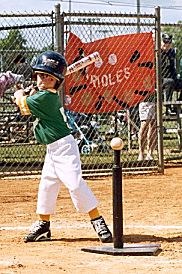 that loved baseball but was not sure about his ability to compete on the high school level..... To a confident "near adult" senior that is hoping for a state championship this year.

Times have changed .... from Mom or Dad picking him up after practice to having his own car and being embarrassed if he needs to ride with his parents.

You have spent the equivalent of the cost of the finest big screen television / entertainment center on $250.00 bats and gloves, sliding shorts and athletic supporters, under-armor, batting gloves and cleats. And it was worth every penny!

You have endured weather that was better suited for the Iditarod Sled Dog Race than a baseball game. You know where every high school, within a 100 mile radius, is from your house.

You have been on "suicide watch" the nights that he went 0 for 4, made a crucial fielding error or had a bad pitching outing.

You have also cherished the nights that he had the game winning hit, went 4 for 4 with 2 doubles, made a spectacular game ending defensive play or was so dominating on the mound that it seemed like he was pitching to a group of "tee-ballers." He has "survived" girlfriends, proms, changing friendships, battles with his parents over shaving the 6 hairs on his chin and the English teacher that never smiles. You have had the discussion about how important good grades are so often that even the dog can recite it "word and verse."

They anxiously wait through the summer and fall and then through the endless winter for their "Senior Season" to arrive. He has started to learn how important the off-season work can be and has dedicated himself to it like no time before. He is READY!

Try-outs come for the rookies. The seniors get their chance to strut, posture and "look good." They finally get first choice of uniforms and numbers. The senior year means that they no longer have to carry equipment or clean-up locker rooms. They are now the "Senior Leadership" ..... whatever that means.

Two weeks, now five days, then one day until the first scrimmage game. Finally it is here! And it rains ........

Opening Day dawns bright and clear, all is right with the world. As you listen to the National Anthem you realize that he is within 25-30 games of the end of his high school athletic career. You wonder if he has thought about this. Just a few weeks until it is over.

For the majority of high school players this is

the last organized baseball they will ever play. A few will play one more season with the summer team and a select fortunate few will continue on in college or professional baseball.

Before you realize it "Senior Day" is here. You ask one of the younger player's parents to take pictures for you. The senior players and their parents will be introduced before the game. Mom promises not to cry ... Dad is too tough to cry, the dust from the dry infield has made his eyes water!

The game begins and your concentration on the game is not as keen as it normally is. You think back to how cute he looked in his tee ball uniform, many years ago. You remember the team picture where his front teeth were missing -- and so were many of his teammate's.

You remember his first high school hit or pitching strike out. All the ups and downs, how you feel like his friends are a part of the family and you treat them the same as your own.

You have watched in amazement as these strapping young men, in the final years of being "teenagers," can act like a group of 6 year olds at a Chuckie Cheese.

He has made friends that will last a lifetime -- the parents promise to "stay in touch" but it usually doesn't happen. Everyone goes their own way. Hopefully your son has had a relationship with a coach that will remain positive with him for the rest of his life. Every athlete deserves that one special coach in his life.

It has been a wonderful ride and you wouldn't trade it for any amount of money. You hope that your children are as fortunate as you have been.